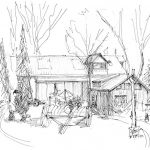 Bruce Wilson and Annie Prince I met Joris Rosse in the summer of 1979 shortly after I started dating my wife Annie Prince. Annie & I were married at his home on Creek Road in 1980, where he lived with Gloria Leight who was Annie’s best friend. Our wedding was the first major event at his farm. When Joris died on February 26, 2021, having recently turned 91, we … END_OF_DOCUMENT_TOKEN_TO_BE_REPLACED

by Carter Humola The world is rapidly approaching a tipping point, the likes of which the human race has never experienced before. This breaking point will not come with the tolling of bells nor will it be televised; rather, the day will come as any other. We will start our vehicles, eat processed meat, and plug in our electronic devices. But there will be a catastrophic … END_OF_DOCUMENT_TOKEN_TO_BE_REPLACED

by Bob Riggs Saturday, March 3, marks the second anniversary of the murder of the courageous worker for justice and women's autonomy, Berta Cáceres.  She was killed in her home in La Esperanza, Honduras, because of her leadership in the struggle of the Lenca People in defense of their lands, rivers and forests, which were being threatened by the construction of mega … END_OF_DOCUMENT_TOKEN_TO_BE_REPLACED

Once again, Greta Thunberg speaks out to government 'leaders' who are guilty of failing to act on global warming and climate change. Read her April 23 address to Parliament. Their failure to act parallels the failure of politicians in most 'developed' countries. (Just look at the idiotic responses to the 'Green New Deal' proposal in the US!) I am impressed by the … END_OF_DOCUMENT_TOKEN_TO_BE_REPLACED