The categories of Climate & Energy are linked because it’s almost impossible to consider energy issues without considering their impact on the Climate.

The following statements by students and young adults reflect their thoughts, their deepest hopes and fears on climate change and aspects of sustainability in the past, present, and/or future. We encourage you to share your thoughts with us: just email the editors or post a comment on the Alliance’s website!   [A few quotes were very lightly edited to fit the print … END_OF_DOCUMENT_TOKEN_TO_BE_REPLACED

Peter Crownfield and Devon Jewell Editors note: This essay is adapted from the Alliance summer internship report on Climate Change Education, for which Devon was the lead author, and from a longer article on environmental justice written that Devon and Peter wrote for the upcoming State of the Lehigh Valley report. Why do some serious, widespread problems persist year … END_OF_DOCUMENT_TOKEN_TO_BE_REPLACED 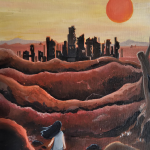 Cecelia Tabor The electric buzz of the lights was constant, like crickets on a summer’s night. The noise would only stop when the blackouts hit. But these were occurring more and more frequently. The lights would flicker, sputtering feebly in the damp rooms, and then die. Silence would fill the underground world as large white eyes blinked rapidly, adjusting to the … END_OF_DOCUMENT_TOKEN_TO_BE_REPLACED

Amaiya Kavachery How many times have I thought the world was ending How many days are we left spending Fearful What is the cause? Sadly the people mask the truth, not themselves It is fake news, “fake news” You need to know Temperatures are low In Antarctica You need to see Burning trees Of wildfires You need to feel The fate we have sealed Repercussions. Mutations of … END_OF_DOCUMENT_TOKEN_TO_BE_REPLACED

Nathaniel Stratton When discussing the latest controversies regarding climate change, you have to talk about Line 3. Line 3 was a pipeline built in the early 1960s from the oil fields in southern Canada down through Minnesota, transporting hundreds of millions of barrels of crude oil to the states each year. Over the years, the pipeline corroded significantly, cutting its … END_OF_DOCUMENT_TOKEN_TO_BE_REPLACED

The following pages invite a radical type of societal and self reflection prompted by the connections drawn between climate change and other systemic issues. They are all related symptoms of a defunct system based on overconsumption and resource inequality. We invite you to imagine a world that’s more equitable for everyone — not just a select few with extreme wealth or luck. … END_OF_DOCUMENT_TOKEN_TO_BE_REPLACED

Margaux Petruska We are facing a climate emer-gency, and the United States is one of the largest emitters of greenhouse gas emissions (GHG), so it’s essential for all industries to do their part in stopping the damage. Recently, two important members of the health care community, The New England Journal of Medicine and the National Academy of Medicine, called to the … END_OF_DOCUMENT_TOKEN_TO_BE_REPLACED

Don Fitz Robert Pollin repeats a message often seen in writings defending alternative energy (AltE): while they briefly shake their heads at capitalist waste, they deny an overproduction problem. In his response to my article on “Be Careful What Energy You Wish For,” his message comes through that there are no limits on what can be done to the Earth’s ecosystems that AltE … END_OF_DOCUMENT_TOKEN_TO_BE_REPLACED

Robert Pollin Don Fitz’s response to my two interviews that Z generously republished makes two major assertions: 1) Reducing overall consumption and working fewer hours provides a viable path on its own to stabilizing the global climate; and 2) Renewable energy sources, such as solar and wind power, are not really “clean” even though they supply energy without generating CO2 … END_OF_DOCUMENT_TOKEN_TO_BE_REPLACED

Don Fitz's response to Robert Pollin Climate change is an existential problem confronting humanity and Robert Pollin offers well thought-out plans in his first and second articles. There is only space here to respond to these themes: (1) We can reach zero CO2 emissions by 2050; (2) An enormous expansion of alternative energy (AltE) can create far more jobs than would be lost … END_OF_DOCUMENT_TOKEN_TO_BE_REPLACED