Excerpt from an online post by journalist Seth Abramson: There is an active insurrection inside the United States.… A large percentage of Americans—perhaps as many as 30%—no longer wish for this country to be a democracy. They do not believe in elections, or rule of law, or the peaceful transfer of power. They would welcome martial law, an authoritarian strongman, … END_OF_DOCUMENT_TOKEN_TO_BE_REPLACED

ROBERT JENSEN Is the United States making progress in the quest to transcend its White-supremacist history? After the end of Jim Crow and legal racial segregation, the debate was over how and to what degree racism endured in less visible ways, with some arguing that the United States had become a “post-racial” society? That debate evaporated with the re-emergence in the … END_OF_DOCUMENT_TOKEN_TO_BE_REPLACED

Miranda Davis Miranda is a Graphic Design/Illustration student at East Stroudsburg University. She describes her work as “a love letter to the black community and an acknowledgment of the trials found within and how the absolute comfort of the privileged majority prevents a seat at the table for minorities”. Return to spring 2021 Table of Contents … END_OF_DOCUMENT_TOKEN_TO_BE_REPLACED

ROXANNE DUNBAR-ORTIZ[Link to the image of this book’s cover: https://images.app.goo.gl/iUjAjYfsYVbuccYK7] Mahmood Mamdani locates the founding moment of the modern nation-state at 1492. “That year marked the beginning of the nation-state… born of two developments in Iberia. One was ethnic cleansing, whereby the Castilian monarchy sought to create a homogeneous national … END_OF_DOCUMENT_TOKEN_TO_BE_REPLACED 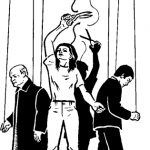 ROBERT JENSEN It’s getting harder for people in the United States to turn away from the sexism, racism, and inequality that is woven into the fabric of society. From the women’s march of 2017, to the ongoing protests against white supremacy in policing and other institutions, to the wider attention being paid to extreme disparities in wealth — the demand for justice … END_OF_DOCUMENT_TOKEN_TO_BE_REPLACED

Let us Burn All Illusions in 2021 Left Turn welcomes the year 2021 without any illusions about the nature of the system that produced the severe political, economic, and public health crises of 2020 and the new horrors surely on their way if we as a society fail to counteract the ingrained tendencies and deliberate policies that have produced the present unsustainable … END_OF_DOCUMENT_TOKEN_TO_BE_REPLACED

by Maison Allen On July 18, in the small town of Palmerton, Pennsylvania, a non-violent protest in support of Black Lives Matter turned aggressive and dangerous as protesters were confronted by armed and hostile counter-protesters. My good friend, Sierra Hahn and I, both Palmerton natives, organized the original protest to raise awareness and help people understand racism … END_OF_DOCUMENT_TOKEN_TO_BE_REPLACED

PBS recently republished a column by Rusul Airubail titled 'Why educators still need to talk about 9/11 — and Islamophobia'. I think this applies equally to adults and is actually very closely related to current experiences of racism and violence. It is still critical to provide safe spaces for children and adults to discuss the wave of Islamophobia that swept the US, with … END_OF_DOCUMENT_TOKEN_TO_BE_REPLACED

As we consider the events in Minneapolis and Kenosha, let's take a minute to consider that these events are part of a pattern that's gone on for many years. It's not just a case of the disproportionate killing of Black people by the police, it's also white supremacy showing itself in many other ways, some of them quite obvious. We could go all the way back to the Black … END_OF_DOCUMENT_TOKEN_TO_BE_REPLACED