Thanksgiving Day seems an appropriate time to post this brief historical note about Colonialism in the United States.

I’ll start by mentioning that this is the original territory of the Lenape, now known as the Delaware.

Like most parts of North America, Pennsylvania & New Jersey were occupied by Indigenous people for thousands of year before the first European settlers arrived — archeological evidence dates back to approximately the end of the last ice age. Here in the Lehigh Valley, it was the Lenape, one of the first Indigenous nations to sign a treaty with the settlers (in 1778). The Haudenosaunee (Iroquois) Confederacy did not include this area, but had significant influence.

In most Indigenous cultures, a strong ethic of stewardship and care for the land and all beings, but there was no concept of land ownership—treaties did not ‘sell’ land, but recognized that others could also use it. Less than 100 years later after the treaty, though, the government forced the Lenape to move west, first to Ohio and later to the Great Plains. (Some fled to Canada & other parts of the U.S.) Many of their sacred places were then taken over by the colonists.

This is a very compressed history of Colonialism in our area, but it parallels what happened to most Indigenous people in North America: broken promises, displacement, and erasure.

We can see this colonial mindset is still at work today:

So why is Thanksgiving a good day to post about colonialism? 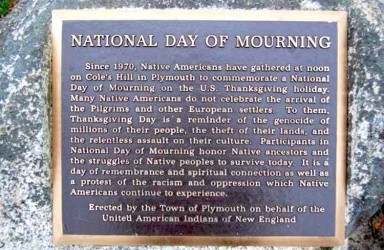 One of the first official celebrations of Thanksgiving was proclaimed in 1637 by Governor John Winthrop of Massachusetts. The Pilgrims, of course, had survived largely because of the generosity of the Wampanoag, but the Thanksgiving event was held after men from Massachusetts returned from slaughtering the Pequot (men, women, & children).1

So don’t be surprised if Indigenous people don’t see Thanksgiving the same way you do. In many ways, it is symbolic of the settlers’ treachery, theft or destruction of natural resources, and genocide.

NOTE: I am not an expert on Indigenous culture or history, so I apologize if I have glossed over anything. Please let me know if you see any errors!

1. Thanksgiving: A National Day of Mourning, by Moonanum James and Mahtowin Munro