by Medea Benjamin & Zoltan Grossman Since George Floyd was murdered, we have seen an increasing convergence of the “war at home” against Black and brown people with the “wars abroad” that the U.S. has waged against people in other countries. Army and National Guard troops have been deployed in U.S. cities, as militarized police treat our cities as occupied war zones. In … END_OF_DOCUMENT_TOKEN_TO_BE_REPLACED 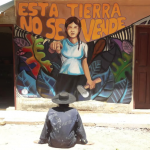 by Vijay Prashad On 10 November 2019, a coup d’état took place in Bolivia. The commander-in-chief of the Bolivian Armed Forces asked President Evo Morales to resign. The police had already mutinied, and society had already been destabilized — this had been triggered by a presidential election whose results had not been recognized by the opposition and whose results had been … END_OF_DOCUMENT_TOKEN_TO_BE_REPLACED

by Ted Morgan For many years now, an immigration “crisis” has regularly emerged as a hot topic in the corporate media. Presidents and Members of Congress from both political parties have in different ways raised alarms about undocumented or “illegal” immigrants in the United States. And both parties have raised false expectations that they might resolve the nation’s … END_OF_DOCUMENT_TOKEN_TO_BE_REPLACED

Cambiz Amir-Khosravi  While planning a trip to Florida in 2011 to see my ailing mother-in-law, I realized that the Department of Motor Vehicles had misspelled my last name. Instead of Khosravi, they spelled it Khosrui. It might be a minor issue to most people but having a Middle Eastern name in today’s xenophobic climate I naturally became paranoid. Having heard of … END_OF_DOCUMENT_TOKEN_TO_BE_REPLACED

Anthony DiMaggio George Orwell’s 1984 is a dystopian novel about authoritarianism, and is widely understood as a critique of Stalinism and centralized communist states. But Orwell believed that propaganda functioned in both communist and capitalist states alike. His insights about the uses and abuses of propaganda are remarkably relevant when studying American and … END_OF_DOCUMENT_TOKEN_TO_BE_REPLACED

(With apologies to Robert Frost and his poem by the same title) When I saw the headline 'Attitudes on Arabs, terrorism shifting' in today's Morning Call, I expected to read that people here in the Lehigh Valley were finally getting over their prejudices and stereotypes about Arabs & Muslims. Instead, I learned that even as other fears have decreased, ‘wariness of … END_OF_DOCUMENT_TOKEN_TO_BE_REPLACED