Login
Not a Member? Register Here || Reset Password
Home / Archives for Industrial Workers of the World

Industrial Workers of the World 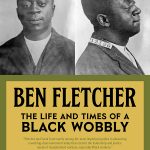 ERIC DIRNBACH Growing up in Philadelphia, I learned about some of the rich local labor history: the 1827 founding of the first union to cross craft lines, the 1835 general strike, and the 1869 founding of the Knights of Labor. Some of it was personal—my father took part in the 50-day teachers strike of 1981. But it wasn’t until decades later that I … END_OF_DOCUMENT_TOKEN_TO_BE_REPLACED