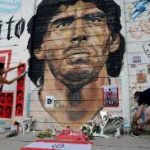 FEDERICO FUENTES Memorial Mural by Magali Druscovich | Photo by Reuters Debate over who was the greatest ever footballer will rage on, but Diego Armando Maradona, who passed away on November 25 aged 60, will almost certainly go down as the most adored. Maradona will always be remembered, by hundreds … END_OF_DOCUMENT_TOKEN_TO_BE_REPLACED