Login
Not a Member? Register Here || Reset Password
Home / Climate & Energy / We Can Do More 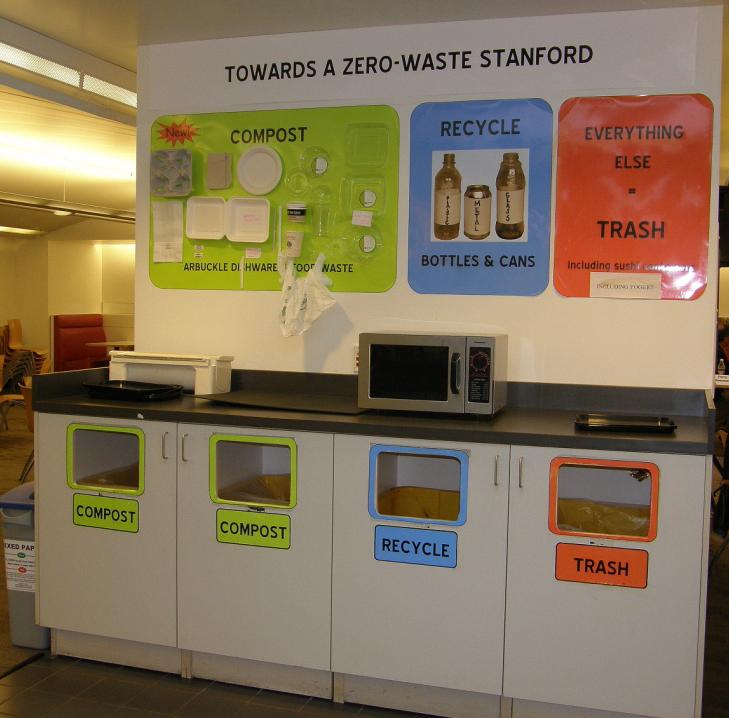 When I first viewed this image, I was happy and very optimistic about the change that Stanford University has made when the school adopted a more sustainable recycling station. But, I soon found out that this recycling station is over five years old!

While some schools today are struggling to make recycling a priority, Stanford has already taken the necessary steps and installed a complete station that features two compost bins, a recycling bin, and a trash bin. Above the designated bins are examples of what sorts of items can go in each receptacle. It is also apparent that the university is using packaging that are made out of items that are able to be composted which is much better for the environment. Because everything is color-coded, people must have an easier time identifying where to dispose of their items as there is less confusion and mix up due to the fact that everything is clearly labeled.

This recycling station forces people to really think about where all of their waste goes. It also furthers peoples’ thinking about the growing importance of sustainability. Students will hopefully begin to practice better recycling habits a daily basis and also influence others as well.

In order to have a more sustainable future, we must take the necessary steps and try our best to change our actions to benefit ourselves and our environment. There are easy alterations that schools can make to have a significant impact on their surroundings.

For example, there are recycling and compost bins in some of the dining halls around Lafayette College’s campus. But, not in all of them. Why not make the change at all dining locations on campus and not just some of them? Another issue is that at one of the main dining halls somedays there is a trash can where you throw all of your waste, while somedays you don’t throw anything away and pass it through the chute to be composted. It seems as though Lafayette wants to make this change to have a more sustainable future, but it will be hard for the College to have an outstanding effect because they are not completely altering their waste habits.

The image of Stanford University’s recycling station should be incentive for schools to become more sustainable. While it may be a difficult task, a recycling station is one of the first steps a institution can take.