But does arguing at least get us somewhere? To test this, a group of students at Lehigh University staged an information stake-out in the center of the campus on Friday night with an objective: invite their peers to the Largest Climate March in History: The Peoples Climate March.  Via a couple of projectors, a sound system and two huge walls at the University Center, they were able to make people pause for a moment and think about the Climate March and the Climate Summit.

Finding yourself in need to catch-up on the debate?  You can learn more about the summit itself and why it matters by checking out this special brief ‘The People’s Climate March: Everything you need to know to change everything.

But ask yourself why you aren’t aware of the Call to Action for the Climate March? Light projections using the viral Disruption video and the People’s Climate March Graphics attempted to encourage a response from students on Lehigh’s Campus. But the argument in support of Climate Change moved no one. The real question had been inadvertently raised: How are students at Lehigh living the spirit of the Climate March?  Are they invested?

The answer is, the students at Lehigh University aren’t aware of it at all.  Everyone stopped because they were attracted to the Light from the videos.  Yet, no one knew what the videos were about. Instead of an information exchange and debate the organizers expected, they received confused expressions and low-interest in an event that will shape everyone’s future.

What became obvious in the outreach session was the disconnect plaguing climate change action. When buses will be travelling to the Climate Summit this Sunday in droves from all places across America, what could possibly be missing from student opinion in a small town that is only 2 hours outside of NYC? What are Lehigh students missing? 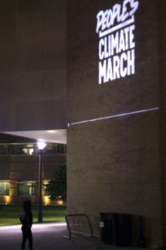 “This non-reaction from students is a larger warning to Universities that they aren’t doing enough to engage youth on Climate Change.” —Gerardo Calderon, a Lehigh Student and community organizer.

The evening was a harsh reality-check of what their peers knew about the Climate Summit this week at the UN. It was clear that engagement on the campus about climate change was staggeringly low.  And that individual connection to climate change was even lower.  What gives?

A poll conducted by Gallup this year found that while 69 percent of Americans believe climate change is caused by human activity, only half are personally worried about it. “We’ve won the argument but we haven’t done anything on it,” Bill McKibben of 350.org is noted for saying. “We haven’t been able to overcome the power of the status quo enough to make real change, so that we’re losing the fight.”  McKibben is completely on-point.

Its not a fight of factual evidence, its an emotional one.

Those words are echoed by a study from Yale University which supports the idea that emotions act as drivers to connect people to Climate Change Action. “The Role of Emotion in Global Warming Policy Support and Opposition” speaks to what we already know. Looking at how research points to the “affect (feelings of good or bad) and affective imagery (associations) strongly influence public support for global warming.”  What happens to the style of argument when we voice the issue of climate change as if specific emotions, like fear, anger, worry, guilt that are programmed into our discourse and communication?

Through this graphic the paper further shows how specific emotions were stronger predictors of global warming policy than supported cultural worldviews. 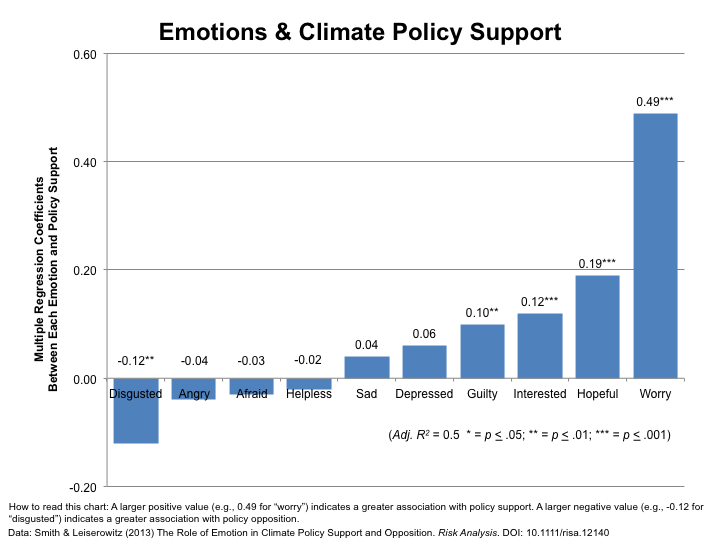 “50% of the variance in public support for global warming policies was explained by the emotion measures alone. In particular, worry, interest, and hope were strongly associated with increased policy support.”

Enter a local climate change advocate in the Lehigh Valley, Dan Poresky, has spoken about the role of human emotion in the efforts to reach a larger audience to discuss engagement with Climate Change.  His proposal for Climate Action provides a step-by-step action guide for organizers to place more emphasis on people than the planet. Put simply, it’s his call, a local citizen’s call, to action.

By emphasizing, “How is climate change going to affect me?” Poresky argues that only when people feel secure in the vision of their future will they push governments to act.  That security needs to be based in emotional response like entitlement, fear, anger, and a sense of loss of what you cannot regain. This type of proposal is what is needed from citizen groups.  At the junction of climate change communication efforts from Light Shows to step-by-step guides is the answer to the lack of emotional engagement.

“People will more readily accept the adaptations necessitated by climate change when they can envision living comfortably in a society with reduced carbon emissions is the norm. Its all about public attitude” said Poresky.

One thing is for certain the People’s Climate March will be an emotional tour through Manhattan on September 21. Over 400,000 are expected to show up and walk together. This preempts the week leaders are coming to UN Secretary General Ban Ki-moon’s Climate Summit to discuss ambitious goals to reduce global warming pollution. That bit is incredibly important.

The People’s Climate March will take place BEFORE a UN meeting on climate change attended by delegates from 168 countries. The message is clear: the pressure is on.  Who could argue with that?

If this People’s Climate March doesn’t make people feel something?  What will?

Hope to see you all there, physically and emotionally invested. 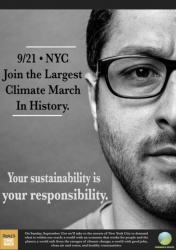