We think it’s important to make sure decision-makers, parents, and students are aware that there are some serious very serious health concerns. We have notified several institutions and municipalities and publish this Open Letter so others will be aware of the risks before they start down this path. [If you have questions or want more information, email us at turf@sustainlv.org.] 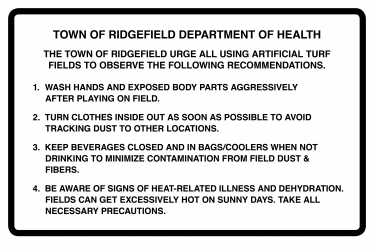 At this point, there are few absolute answers, but many reasons to be cautious. In addition to a reported link to lymphoma—a serious blood cancer—other known health and safety concerns include the following:

Since it is clear that installing synthetic turf may present serious risks to human health and the environment, the precautionary principle requires us to defer such action.

If it is decided to proceed with synthetic turf fields despite the known hazards, we think it is extremely important to consider the following:

2. Because public fields will likely be used by leagues, informal groups, and members of the general public—including children—it is essential to make sure users and parents have clear information about the health hazards and how to protect their health. This may require clear signage and warnings.

3. To protect public safety in the summer, the fields should be closed whenever the surface temperature exceeds a safe level. This means not only preventing organized games, but making sure that children do not wander onto the hot surface.

4. Because vendors have been known to exaggerate cost savings, they should be required to provide detailed written information to back up any claims about health, safety, or reduced maintenance re­quire­ments or costs. For example, some studies comparing synthetic to natural turf have shown that costs for synthetic turf can be higher than natural turf! (Potential vendors should be required to present any claims and responses to questions in writing.)
Ongoing costs may include the need to inform the public and anyone who uses the fields about how to protect themselves and their children, to develop liability waivers for leagues that use the field, and specialized training for EMS personnel. [Also see Turf Burns – Treatment page.]

5. In many or most cases, synthetic turf ‘vendors’ act as brokers, contracting with other parties to provide design services, manufacture the turf, deliver the infill material, and install the drainage systems and turf. This makes it difficult to rely on any assurances or even written warranties, so it is important to consider how to protect against claims that may arise.

We will be presenting the results of the study in April 2015; we can also provide more information to you then.

[If you have questions or want more information, email us at turf@sustainlv.org.]