Login
Not a Member? Register Here || Reset Password
Home / Focus on Pages / Is explosive crude oil traveling through your community?

Trainloads of crude oil from the Bakken shale in ND do pass through the Valley — and these trains travel through the center of Allentown, Bethlehem, and Easton, often right next to the Lehigh River. This raises major safety concerns and serious questions about how to protect people.

The Wall Street Journal‘s map of rail shipments estimates 1–10 trains/wk on the Norfolk Southern line. One tank car holds over 30,000 gallons, so a typical train of 100+ cars would be carrying 3-million gallons or more!

“Each tank car of crude holds the energy equivalent of 2 million sticks of dynamite or the fuel in a wide body jetliner …  In 2013, rail cars spilled more crude oil than nearly the previous four decades combined (1.14 million gallons in 2013 compared to 800,000 gallons from 1975 to 2012). —Russell Gold and Betsy Morris in the Wall Street Journal

This Oil Trains Blast Zones map shows the evacuation zones [red], with the danger zones [yellow] extending another half mile. 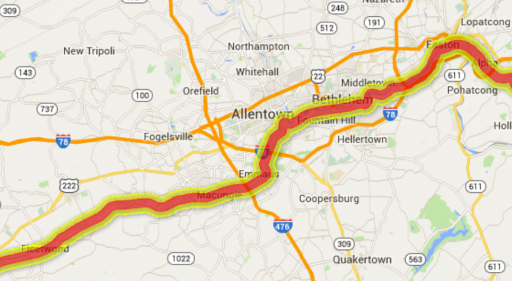 Note: The maps above deal with explosive crude from the Bakken Shale, but there is also a significant volume of Liquified Petroleum Gas beginning to move through the Lehigh Valley from the Marcellus Shale region. Although the cars used for LPG are probably better built than the crude oil cars because of the pressure needed to liquify the gas, they are still vulnerable. We haven’t yet been able to find any clear reports of volume or frequency of these trains, but we have seen them moving through Bethlehem.

Most trains reach their destinations safely, of course. Derailments are not common, but they do occur— there’s been at least one this year [fall 2014] in Bethlehem. Fortunately most derailments don’t involve crude oil or gas that explodes or catches fire — but when they do the results can be disastrous, as we saw in 2013 & 2014. [See photos]

Can local communities ban such shipments endangering their residents? In general, only the Federal Railroad Administration can regulate the railroads. A community rights ordinance might work, but would probably be attacked by the railroads and the federal government as a restriction on interstate commerce. For over 100 years, a general principal of law—generally known as known as ‘Dillon’s Rule’—has been that municipalities have only those powers granted to them by the state. [Dillon was a corporate lawyer who saw municipalities public services and infrastructure as a threat to private interests.]

Who responds if there is an emergency? It’s up to local fire departments and emergency-management agencies to plan for such disasters, and this is done at taxpayer expense. The railroads do not notify the public or agencies or help financially, and they do not have disaster-response plans that could cope with catastrophes of this magnitude.