Not a Member? Register Here

Dr. Michael Mann – A Return To The Madhouse: Climate Change Denial in the Age of Trump – MAREA

For this very special event (rescheduled from May), our speaker is Dr. Michael Mann, a lead contributor to the Intergovernmental Panel on Climate Change (IPCC) scientific assessment report that was awarded the 2007 Nobel Prize. Dr. Mann is an internationally recognized outspoken advocate for climate action, an American climatologist and geophysicist, currently director of the Earth System Science Center at Pennsylvania State University, and author of hundreds of scientific papers and three books–Dire Predictions: Understanding Global Warming (2008, 2015), The Hockey Stick and the Climate Wars: Dispatches from the Front Lines (2012), and, together with co-author Tom Toles, The Madhouse Effect: How Climate Change Denial Is Threatening Our Planet, Destroying Our Politics, and Driving Us Crazy (2016). And he’s a really nice guy. Here’s how he describes the talk he plans to share with us…

In fall 2016, I co-authored the book “The Madhouse Effect: How Climate Change Denial is Threatening our Planet, Destroying our Politics, and Driving us Crazy” with Washington Post editorial cartoonist Tom Toles. At that time, many felt that climate change denial had been rendered irrelevant–that we were past it, and ready to tackle the problem head on. With the election as President of Donald J. Trump— an individual who rejects the overwhelming consensus of the world’s scientists that climate change is real and human-caused — denialism however has now officially infected the very highest level of our government.

The official policy of the U.S. government is distraction, denial and delay, and doubling down on our headlong exploitation of dirty fossil fuel energy. I update the story told by The Madhouse Effect using humor, satire and where appropriate, ridicule, built around Tom Toles’ famously insightful, edgy, and provocative climate-themed cartoons in the Washington Post.

I will review the scientific evidence of climate change, the reasons we should care, and the often absurd efforts by special interests and partisan political figures to confuse the public, attack the science and scientists, and deny that a problem even exists. Despite the monumental nature of the challenge we face, particularly in the era of Trump, I will explain why I’m cautiously optimistic we will prevail in the greatest battle human civilization has ever faced—the battle to avert catastrophic and irreversible climate change impacts. 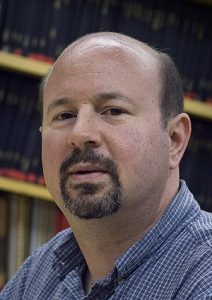 MAREA is so pleased to have Dr. Mann share his expertise, research and experience with us. We hope you’ll join us! The presentation is Tuesday, Sept 24 , at 7:00 at TEKPark (9999 Hamilton Boulevard, Breinigsville, PA 18031, between Kutztown and Allentown).

MAREA meetings are free and open to the public. All are invited! After the meeting, please plan to stick around and chat with friends old and new. Light snacks will be served. Hope to see you there!

For first-timers, please see TEK Park Directions for map and parking directions. (Signs for parking are posted about 30-min before event starts.) Any questions, call (484) 646-3295. Welcome!