It seems pretty obvious that we’re on a track that leads to an extremely harsh future.  Can we stop, take stock of where things are headed, and make some serious changes — before it’s too late? Can each of us devote our talents and abilities to produce a future that’s sustainable & just?

Some thinkers of previous generations give us some clues as to how to proceed: 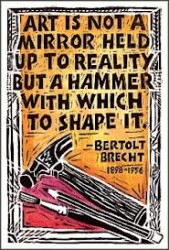 Bertolt Brecht, author of many works with strong anti-war & social justice themes, is well known for his statement that ‘Art is not a mirror held up to reality, but a hammer with which to shape it.’

Over 10 years ago, the Green Destiny project at Penn State University warned:

‘Currently, while universities teach their students that the vital signs of the Earth are in decline, graduates continue to leave college to begin lives that generally contribute to, rather than mitigate, the growing array of environmental and social problems now plaguing us….’

German theologian Dietrich Bonhoeffer observed that ‘The ultimate test of a moral society is the kind of world that it leaves to its children’ — but the teachings of the Iroquois Confederation were even stronger. Oren Lyons, Chief of the Onondaga nation put it this way:

(Apparently the government, settlers, and U.S. Army only wanted their land, not their wisdom.)

I think the crux of our problems is that while a growing, but still small, group of people is working for a sustainable and just future, our schools and colleges are producing a greater number of people who will go out and ‘contribute to, rather than mitigate’ the problems.

Business as usual is a recipe for disaster. The small, incremental changes we’re making are good — but not sufficient. We all need to consider what we, personally, can do to change this, before it really is too late!

It’s personal. Do you make every decision in consideration of the impact and needs of future generations? What can you do to make sure you use your gifts and talents to that end and help more people find paths to a sustainable future?

‘If the Earth were your body, you would be able to feel the many areas where it is suffering. War, political and economic oppression, famine, and pollution wreak havoc in so many places. Every day, children are becoming blind from malnutrition, their hands searching hopelessly through mounds of trash for a few ounces of food. Adults are dying slowly in prisons for trying to oppose violence. Rivers are dying, and the air is becoming more and more difficult to breathe…’
—Thich Naht Hanh, in Peace Is Every Step