“Conservation is a state of harmony between men and land”, said Aldo Leopold in his classic A Sand County Almanac: With Essays on Conservation from Round River (1966: 189). But land is not just the land. At least not according to Aldo Leopold. He continued, “By land is meant all of the things on, over, or in the earth” (1966: 189).

On page 190, he elaborated, “The outstanding scientific discovery of the twentieth century is not television, or radio, but rather the complexity of the land organism” and then went on to castigate those who would discard seemingly useless parts of the land organism: “The last word in ignorance is the man who says of an animal or plant: ‘What good is it?'”

Or an insect. What good is it? Even, ugh, insects? Ya gotta luv em. Well, Pam Ruch does. Here’s a photo of one she’s taken a considerable liking to: 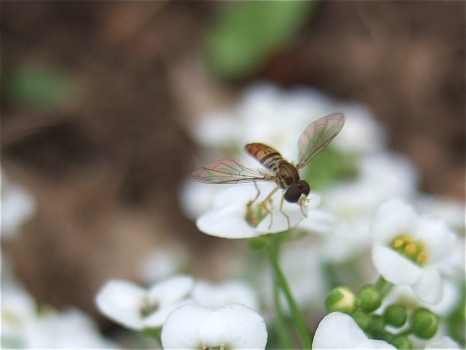 She also included a commentary together with the question: “When is a bee not a bee?”

“Mimics abound in nature. The syrphid fly, a.k.a. hover fly, is one example of an insect that garners some protection by posing as a bee. Look for these tiny pollinators on sweet alyssum and Queen Anne’s lace. Syrphid fly larvae are such voracious aphid eaters that California lettuce growers sometimes interplant sweet alyssum with lettuce crops, just to attract these beneficial flies.

“How can you tell a bee from a fly? The two most visible differences are that bees’ wings are in pairs, while flies’ are single; and flies’ eyes are generally larger and positioned more on the front of the head than bees’. “

It kind of sounds like we’d want to keep such insects with us in a sustainable future. They’re pollinators and aphid eaters. And they look kind of cute, too. So now we need to stand up for the little critters we’d ordinarily want to swat or zap or spray? No way! Yeah, way!