Login
Not a Member? Register Here || Reset Password
Home / Uncategorized / Martin Boksenbaum: ‘Bonding With the Beauty of the Here and Now’

A major component of the Transition Movement’s approach to bringing us away “from oil dependency to local resilience” is through “the heart”, the title of Part Two of the Transition Handbook. How do we get an emotional buy-in to the changes needed? Well, Part Two is subtitled “Why Having a Positive Vision is Crucial.” Rob Hopkins writes:

“It is one thing to campaign against climate change and quite another to paint a compelling and engaging vision of a post-carbon world in such a way as to enthuse others to embark on a journey to it. We are only just beginning to scratch the surface of the power of a positive vision . . . ” (2008-9: 94)

Positive visions of a post-carbon future? But how to keep that from being pie-in-the-sky, unreal utopian delusion? Hopkins makes use of “backcasting”: imagining the future we’d like to see and then figuring out what is needed to get there. But those wonderful things don’t only exist in the future. As Naomi Klein points out in her chapter on “The Right to Regenerate” in This Changes Everything: Capitalism vs. The Climate, getting to the future we’re  envisioning includes saving what is good and beautiful that is in the here and now. The problem then becomes saving what is good and beautiful from the assault of industrial, global capitalism, which:

“specializes in turning living systems into garbage, whether it’s the piles of ‘overburden’ lining the roads in the Alberta tar sands, or the armies of discarded people roving the world looking for temporary work, or the particulates and gases that choke the atmosphere that were once healthy parts of ecosystems. Or, indeed, the cities and towns turned to rubble after being hit by storms made more powerful by the heat those gases are trapping.” (2014: 442)

A starting point, perhaps, for envisioning that sustainable future we aspire to, is to recognize, appreciate, just plain see, the good and the beautiful in the here and now. Allowing ourselves to feel affection, as Wendell Berry might put it, for beauty in the here and now.

For instance, from Sally Keehn, “I am caught up in the beauty of the visual world I see through my camera’s macro lens. I never knew how vibrant the blue in a morning glory could be.” 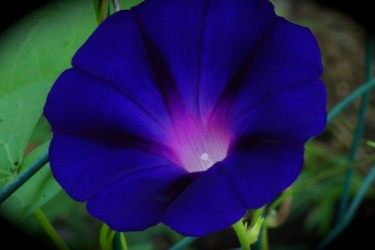 Mightn’t affection for such beauty in the places we live in now be the basis for us standing up to protect nature’s regenerative rights so that such beauty would be present in the future?