Two trains carrying crude oil derailed and caught fire this week: one in rural Ontario on the 14th, and one in Fayette County WV on Monday the 16th. The Ontario fires were still burning on Monday. Each tank car carries about 30,000 gallons of crude, and the train in West Virginia was carrying explosive crude from the Bakken Shale in North Dakota; the results show in the photograph below. In addition to tank cars exploding, thousands of gallons of crude spilled into the Kanawha River and continued burning. Residents had to be evacuated and public water systems had to be shut down because the intake draws from the river.

Trains loaded with crude oil and with liquified gas from the Marcellus Shale region roll through the Lehigh Valley — see earlier post & photos of previous derailments. 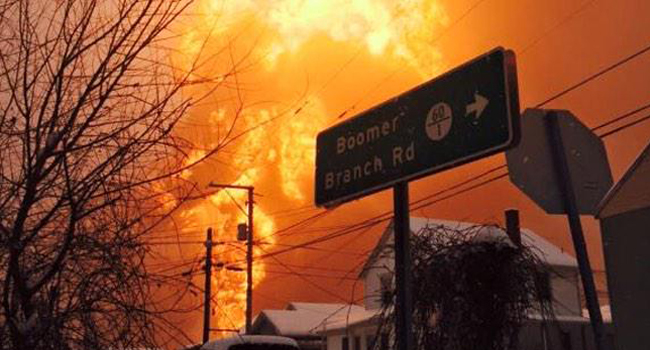